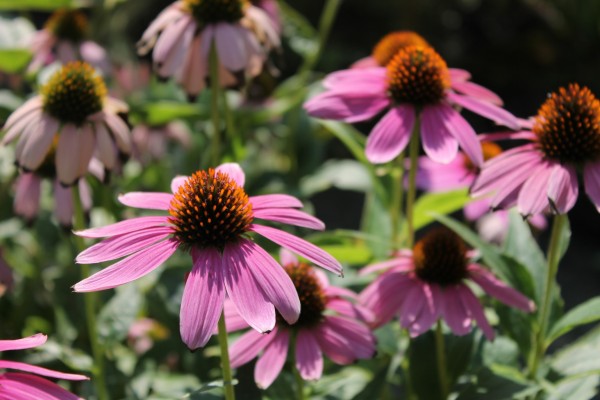 They are multiannual species with a fasciculated root system, with thick and secure roots. The stem is erect, somewhat branched, hairy or hairless, that has many or few leaves that can be lanceolate or elliptic, depending on the species. They have large flower heads made up of ligulate flowers of varying length and color (white, pink, purple) and tubular center flowers. The fruit is a pappus tetragon. The plant height varies according to species.

Many species and varieties belong to the Echinacea genus, but the species for herbal uses are only:

The roots of these three species are used because the roots are rich in active ingredients. Only with Echinacea purpurea (L.) Moench. are the flower, aerial parts used.

After harvesting, the roots of Echinacea angustifolia and Echinacea pallida are washed, cut and put to dry at a temperature around 45°C.  After drying, the product can be milled to obtain a powder, or the tisane cut for the preparation of decoctions and infusions.

The fresh roots from Echinacea angustifolia and Echinacea pallida are left to macerate for a month in alcohol in a 55-proof hydro alcoholic solution. A tincture is obtained and is usually used as a remedy for the flu.

The fresh tops of the flowers of Echinacea purpurea can be pressed to get coneflower juice.

The species belonging to the genus “Echinacea” can adapt easily to different environments.

The propagation is usually done by direct sowing in the field, or by transplanting of seedlings obtained in the nursery. Attention should be paid to the germination rate of the seed: this is good for Echinacea purpurea and Echinacea pallida, but low for Echinacea angustifolia.

It is also possible to divide the tufts, but this method is less common.

The planting is carried out in early Spring or in Autumn.

The crop usually lasts from 2 to 4 years.

A good seedbed preparation before the planting is very important.

During the cultivation, several hoeings in the inter-row are required, to control any weed infestation.

Depending on the environmental conditions, some emergency irrigations can be necessary, especially during prolonged drought times.

In order to increase the development of the roots, it is advisable to cut the flower buds.

Only the aerial parts of Echinacea purpurea are harvested, when they are in full bloom.

The roots, of all the three different species, are harvested in the Autumn or in the Winter of the second year, before the vegetative restart.

The yields are strongly dependent on the climatic and soil conditions, and generally they increase until the 3rd year from planting, both for the roots and for the upper part.

Parts of the plants used:

Preparations based on Echinacea are effective immunostimulants.

They are able to increase the endogenous defenses of the organism, by stimulating the immune system in a non-specific way, through phagocytosis, cytokines and other factors.

Echinacea is also effective as a preventive treatment or as an added support for cold-diseases, flu-syndromes and affections of the upper respiratory tract.

Echinacea extracts are also able to counteract the immunodeficiency caused by antibiotic therapies.

Echinacea has good scar healing and skin regenerating properties, and it used externally in the treatment of ulcers, wounds, burns, dermatitis, mouth ulcers.

Extracts are also used in the formulation of cosmetics with skin-purifying or firming action and for acne troubled skin. The drug exhibits smoothing, anti-wrinkles and epithelizing properties. 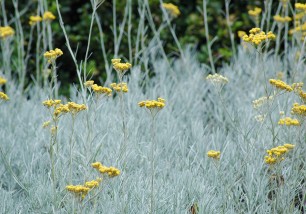