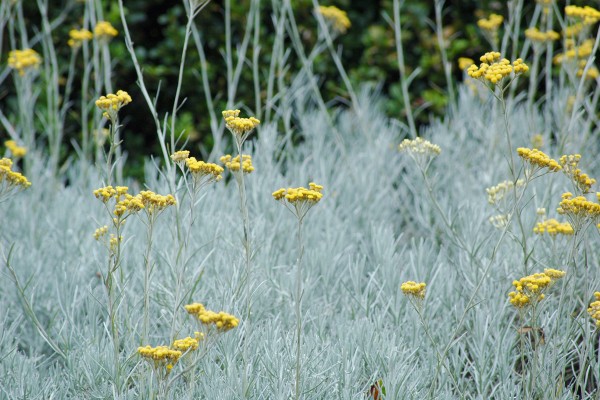 An herbaceous, shrubby plant with a strong aromatic smell similar to the smell of licorice. It has a robust stem with many branches, completely covered with numerous filiform, hairy, and silvery-green leaves. The flowers are predominately tubular that go to form numerous flower heads, gathered in yellow corymbs. The fruit is an oblong oval achene.

There are other species of helichrysum of decorative interest:

From the species Helicrysum italicum there are two subspecies:

It is a spontaneous plant in arid, rocky, and calcareous places, like coasts, but it is also found in sub mountainous zones. It requires great exposure to the sun for a greater production of essential oil. Helichrysum is a plant that fears stagnant water. It is mostly harvested in Italy, ex-Yugoslavia, Spain and France.

It is extracted by steam distillation of the tops of the flower heads harvested at the beginning or in full bloom (June-July) when the tubular flowers open up (earlier than the ligulate ones). These guarantee a higher quality of essential oil. The amount of essential oil in the plant varies from 0,05-0,2% reach a maximum of 1%. There can be 5 to 15 kg/ha of essential oil.

An infusion with optimal properties for the skin is obtained from the flowers of helichrysum left to macerate for about a month in a vegetable oil (extra virgin olive oil, seed oil, linseed oil, etc..). This is widely used in natural cosmetics and in the treatment of different types of dermatitis.

The flowers of helichrysum are sun dried or in artificial driers at a temperature no higher than 40°C. Once the material is dried, it is cut in an herbal tea cut and used for the preparation of herbal tea or other types of extracts.

Helichrysum is spontaneous in dry, stony and calcareous zones like the coasts, but also in low hilly areas.

It requires a good sun exposure, especially for a greater production of essential oil. It does not tolerate water stagnation.

It is cultivated mainly in Italy, ex Yugoslavia, Spain and France.

Propagation can be done by direct sowing, but this is not always a good method because of the germination rate and plant growth heterogeneity. Moreover, in the first phases the growth of the plant is quite slow, and for this reason it does not compete well with infesting weeds.

Propagation by rooted cuttings, division of the head, or transplanting of seedlings is a better choice.

Cuttings are taken from the mother plant in Spring or Autumn and they are placed to take root in a nursery, with a light and always humid substrate.

The transplanting is carried out in different times, depending on the climate: in the north of Italy, for example, it is done late, to be sure the plant will not suffer from late frosts. In Mediterranean areas, for example Sardinia, it is possible carry out an early transplanting, in order to have an already developed plant in drought times.

The flowering occurs between May and July.

The plant density changes depending on the destination of the harvest: A high density (12-18 plants/m2) is preferable if the cultivation is meant for essential oil production, because the plants will have more leaves and less woody parts, and they will better compete against weeds. If on the contrary the cultivation is meant for the production of flowers or dry herbal product, less density is preferred, in order to obtain bigger flower heads.

Wild Helichrysum is a perennial species, but the crop duration is of about 6-7 years. The maximum yield is obtained in the 3rd /4th year.

Being a rustic plant, Helichrysum is not demanding.

During the cultivation it is advisable to carry out some hoeings, to bury manure, aerate the soil and control the growth of infesting weeds.

Irrigation is only needed in the first stages of growth.

If the crop is destined for the production of essential oil, the mowing can be done collecting the whole upper part. A higher cut, collecting only the flowering tops, is used to obtain a product of better quality. In the latter case it is advisable to perform a second cut to level off the plants, reduce the development of woody parts and facilitate the regrowth.

The harvesting is mechanized and it is carried out using mowing-loading machines. The product must be distilled or dried quickly, because it is prone to fermentation. Manual harvesting is used to obtain the dried flowers for ornamental purposes, which are dried in the air in bunches.

The interest in this plant is due mainly to the observations of Dr. Santini (1948), who, studying the utilization of the plant among the people, started to experiment with it.

Helichrysum gives very good results in the treatment of psoriasis and other skin conditions, both for internal use and applying the oleolite or decoction topically on the affected areas.

Santini used Helichrysum in aerosol therapy to treat allergic rhinitis with good results, and also used to apply the aqueous extract as a collyrium (eye drops) in allergic conjunctivitis.

Helichrysum preparations have shown to be effective in the treatment of the respiratory tract affections, where they act as balsamic, expectorant, antibacterial.

For internal use, Helichrysum is used liver issues, thanks to its stimulating action on gastric and pancreatic secretions and its coleretic and cholesterol-lowering properties.

For external use it is an effective remedy in case of burns or chilblains.

It has an important photo-protective activity and therefore helichrysum-based ointments can prevent erythema caused by UV-rays and cure burns, facilitating the tissue repair processes and decreasing pain, burning sensation and itch.

It is also used for hemorrhoids, where it acts as an analgesic and decongestant.

In vivo and in vitro studies also showed the antioxidant properties of Helichrysum. 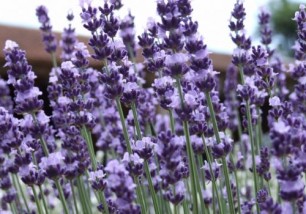 LEGGI TUTTO
May 08, 2014LAVENDER
Lavender is a small evergreen shrub with straight branches, and bushy depor... 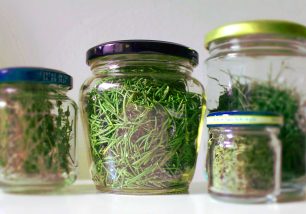