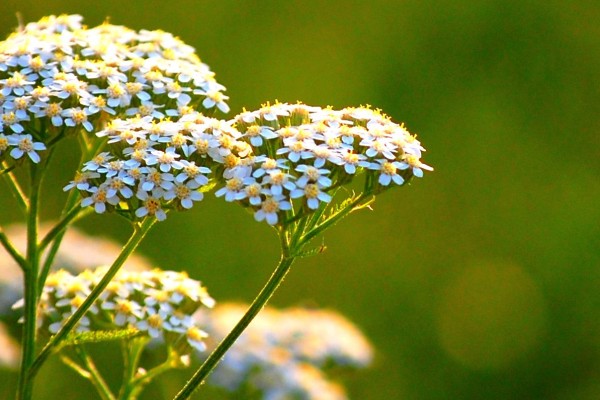 Herbaceous perennial with a creeping rhizome, erect stem, simple or branched on top. It has bright green, narrow, lanceolate leaves, numerous and linear bipinnatisect lancinia. Flower heads are small and collected in relatively large corymbs. The petals can be white or pink. It blooms between May and September. The fruit is a smooth, ovate-oblong achene.

Yarrow is a very widespread plant with that is easily hybridized. This often creates problems in morphological framing. The species of medicinal interest are:

The flower tops are used and undergo air drying or inside a ventilated stove at low temperatures (no higher than 40°C) to avoid ruining the aerial part. Once the product is dried, it can be cut and used for the preparation of herbal tea. Generally, for an infusion, 1,5 g of flower tops per cup are used and left to infuse for 15 minutes. By performing a finer grinding, a powder used for capsules is obtained.

The essential oil is extracted through steam distillation of the fresh or dried plant. The content of essential oil varies from 0,2% to 0,3%, but a few selected cultivars can contain quantities higher than 1%. An essential oil with an intense blue color, similar to that of Chamomile (Matricaria recutita L.) is obtained. The presence of azulene compounds gives it its blue color. These composites are developed only after distillation and are not found in the fresh plant.

A juice can be obtained from the squeezing of the fresh plant. The juice is generally used as is or is inserted into other extracts. In this type of extraction, all the compounds contained in the fresh plant are found. It is taken by diluting it with water and drinking it.

Achillea millefolium L. is a very common plant that grows spontaneously in fields, on roadsides and in grassy and humid places.

Propagation by seed is the main method. Seedlings are grown in a nursery or obtained from division of the tuft. Transplanting is usually carried out in Spring.

The crop can last up to 3 years if the climate conditions are favorable. In colder climates, the plant is annual.

It is a very rustic plant that often grows spontaneously and does not need particular cultivation care.

Flowering tops or the whole plant of yarrow are harvested during the Summer, in full bloom. The harvesting can be manual or mechanized using mowing-loading machines.

Flowering tops or the whole plant.

The plant is used for its content in camazulene (revealed by modern studies), which is higher than that of chamomile (Matricaria recutita L.), with which yarrow shares many properties, for example the spasmolytic and anti-inflammatory activity.

It works as an antispasmodic on the stomach and on the female genital system, and it is also useful against painful menstruations. Thanks to the spasmolytic and anti-inflammatory properties, yarrow-based preparations lead to a normalization of the production of hydrochloric acid and are effective against gastric problems caused by anxiety and neurosis.

In the essential oil there are some antioxidant substances which exhibit a gastro-protective effect.

In addition to this usage as a tonic, stomachic and choleretic the plant has also an important anti-hemorrhagic activity. The utilization of the drug improves the general circulation, thanks to its content of flavonoids.

For external use yarrow-based preparations are used in treatment of varicose ulcers and wounds which heal with difficulty, since the azulenic compounds (from azulene oil) are helpful for re-epithelialization.

Topically the plant is helpful in case of dermatological issues and to alleviate the symptoms of insect stings, thanks to its laxitive and anti-itch properties. Yarrow is widely used in the cosmetic field, in sun-ointment formulations, creams for chapped skin, refreshing creams for delicate and reddened skin, tonic lotions, intimate cleansers, etc.

In vitro and in vivo studies have shown the antimicrobial activity of the essential oil, but also of the aqueous extracts. 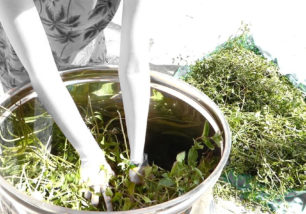 LEGGI TUTTO
Nov 30, 2018MINT ESSENTIAL OIL: CULTIVATION AND PRODUCTION
Peppermint is a plant known and used since ancient times, both in t...

LEGGI TUTTO
Feb 03, 2017HOW TO DISTILL TANGERINE PEEL
The main method for extracting Tangerine essential oil, as it is fo...